Since its inception in 1947, Jewel-Craft, Inc. has provided quality jewelry services as a family-owned and operated company. Our timeline documents Jewel-Craft’s 70-year history, including notable company milestones and rapid growth along the way.

Earl Wesdorp opened Jewel-Craft after working for many years as a Master Jeweler for various companies.

Earl and his brother, Howard, inherited all of their trade skills from their father, Charles Wesdorp. Charles was a retiree of Litwins Jewelers, based in Cincinnati, OH. 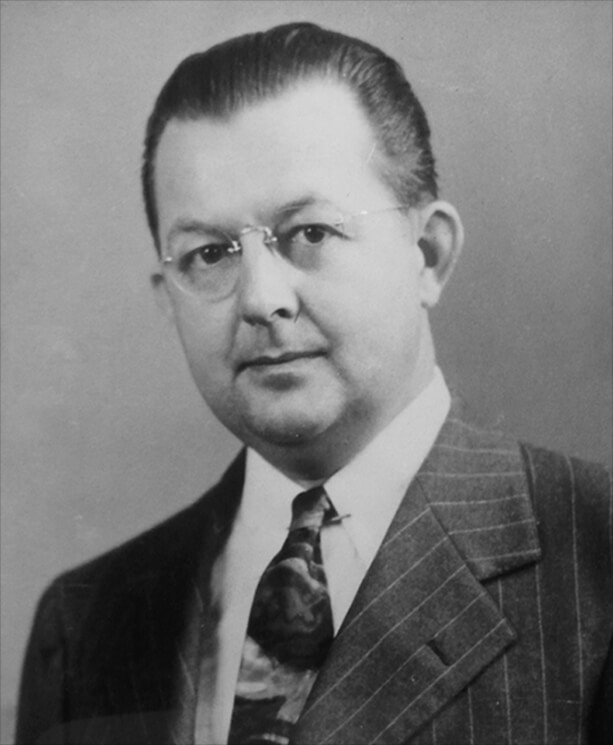 Working out of the attic above his detached garage in Ludlow, KY, Earl provided jewelry repair services to local retail stores.

Jewel-Craft was the first jeweler in the tri-state area to provide pick up and delivery services to local jewelry stores. From the start, Jewel-Craft was focused on providing premium jewelry services and exceeding customer expectations. 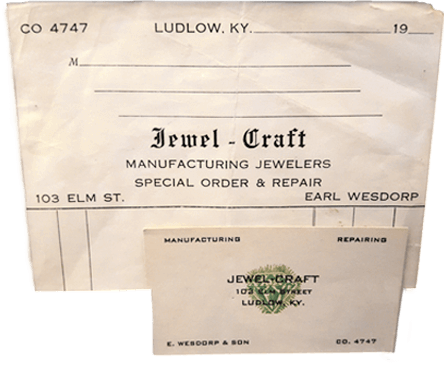 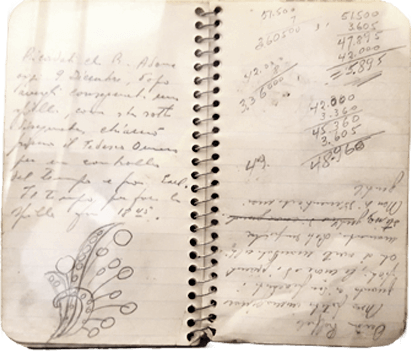 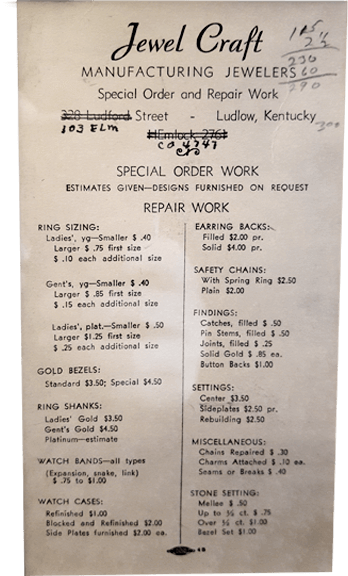 During a rush delivery of a ring sizing job, Earl was struck on his motorcycle and pass away the following morning.

The second generation of Wesdorps, Robert and his wife, Dorothy, took over the family jewelry business. 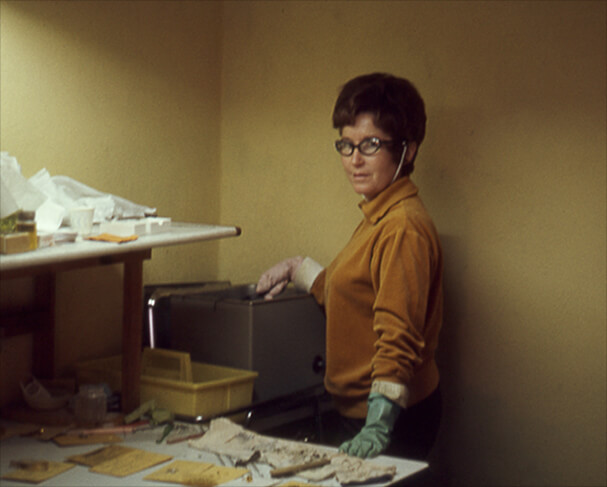 Dorothy at the ultrasonic cleaner.
1953

Robert and Dorothy moved Jewel-Craft to the basement of their home in South Newport, Kentucky.

Robert and Dorothy moved Jewel-Craft again. This time to the basement of their home in Ft. Wright, Kentucky. 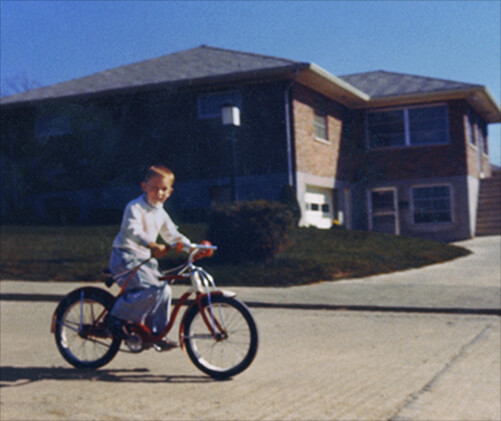 Gary Wesdorp riding his bike in front of the new Wesdorp home in Ft. Wright. 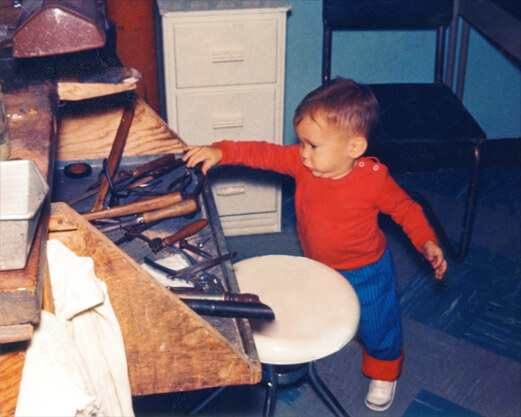 A very young Benet Wesdorp showing an early interest in the jewelry trade.
1966

Dorothy taught her eldest son, Gary to polish his first piece – joining the bench at the age of 13, Gary began to learn all facets of jewelry repair from his parents. 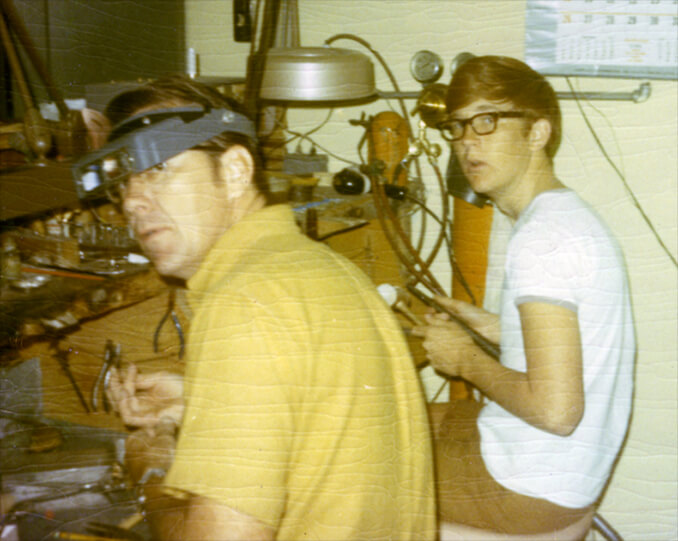 Gary working with his father Robert at the bench.
1970

Tools Of The Trade

Robert and Dorothy's son, Benet, joined the bench to learn the tools of the trade alongside his older brother.

Delivery jobs now began to span three states, with some jobs requiring Jewel-Craft to go as far as 120 miles from the business.

By 1977 Jewel-Craft grew to 11 employees and the company became incorporated. Robert and Dorothy worked side by side while also raising their family in Ft. Wright, Kentucky. 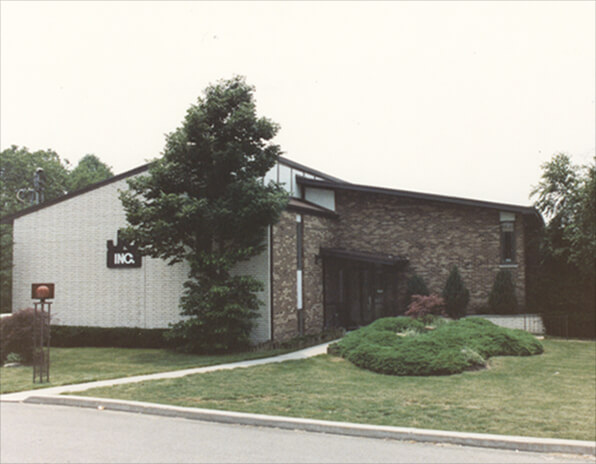 The Wesdorps purchased land and built a 4,200 sq. ft. facility in Crescent Springs, Kentucky. The family moved the business in just one weekend, without missing a single day of work in the process.

To meet the demand of its growing business, the family expanded the facility in Crescent Springs to 10,000 sq. ft. Jewel-Craft purchased its first computer and began providing job-tracking services. 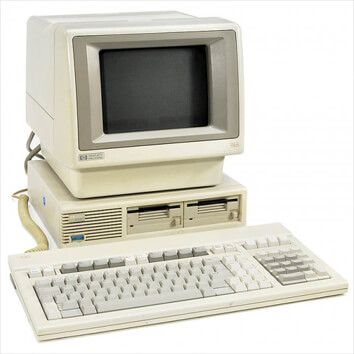 Robert and Dorothy retired and passed the torch to their sons. Passionate about the family business, the brothers began their new roles as managers of Jewel-Craft, Inc. 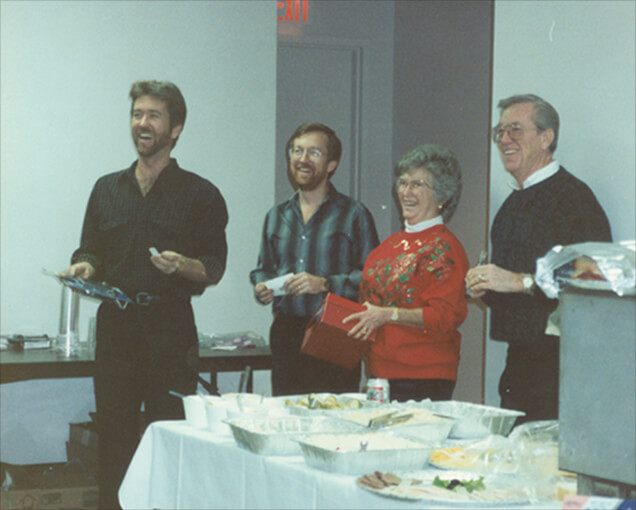 Gary and Benet purchased land and built a 23,000 sq. ft. facility in Erlanger, Kentucky. Once again the family moved the business in a single weekend, without missing a beat. 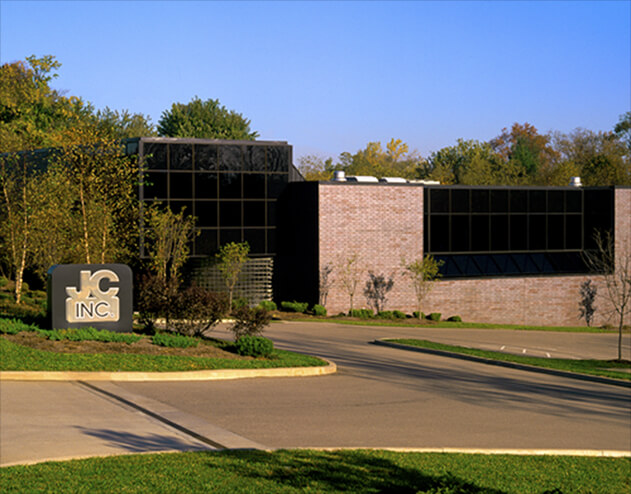 As the Wesdorp family continues to grow, so does the team. Jewel-Craft now welcomes Nick, Stefanie, Ross, Jerah, and Walker Wesdorp to the family business. 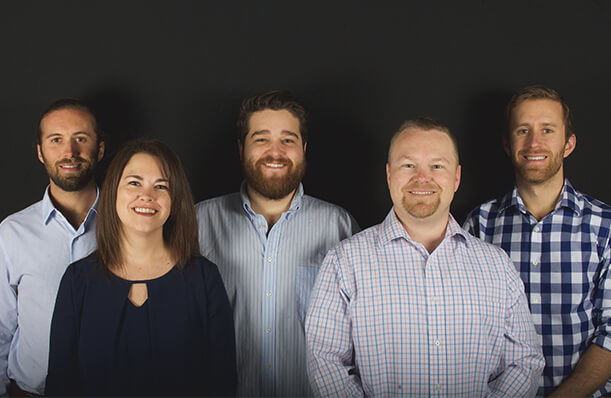 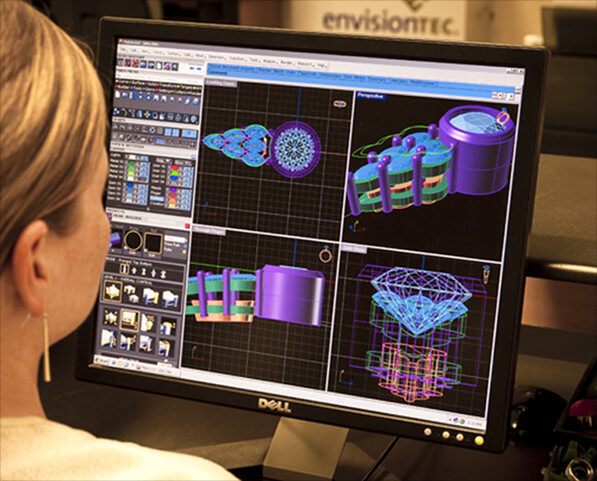 As the business continued to flourish the Erlanger facility was expanded to 30,000 sq. ft. to accommodate new technology, new employees, and a growing clientele. 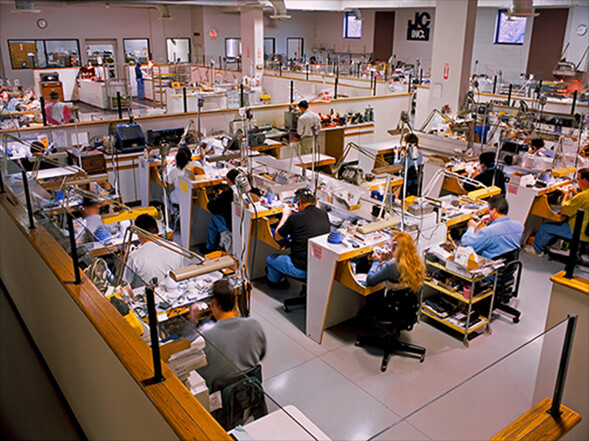 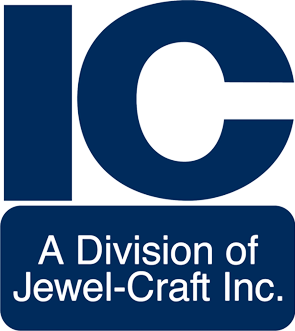 With the launch of the Insignia Collection, Jewel-Craft began to offer manufacturing and custom design services to jewelry stores, distributors, wholesalers, and niche designers. The collection encompasses everything from logo pieces to fine jewelry.

Jewel Craft celebrated the addition of their 100th employee and was now servicing over 3,000 retail jewelry stores across the country. Even with the rapid growth customer satisfaction remained the top priority.

Vendor Of The Year

Jewel-Craft was awarded the 2009 RJO Vendor of the Year for Service and Specialty Goods. Hand selected by RJO members this was quite an honor. 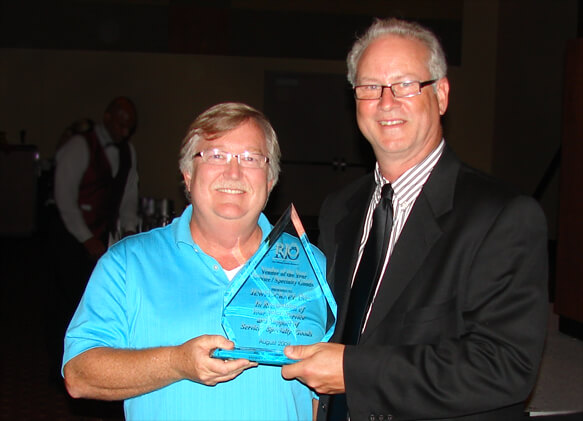 Gary receiving the Vendor of the Year award from RJO President Terry Dickens.
2012

Jewel-Craft celebrates a milestone business anniversary. It's hard to believe it, but what started as a two-person operation was now a busy company staffing over 165 employees. 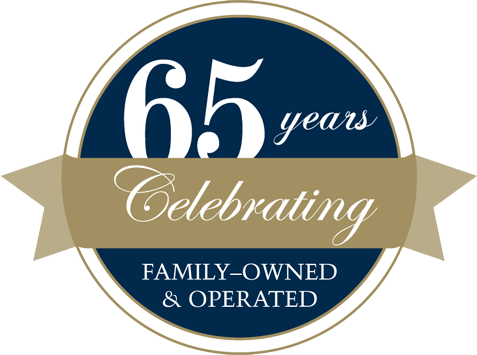 Jewel-Craft Inc., celebrated their 70th anniversary with the launch of their new website. New look, same commitment to excellence. Thank you to all of our customers, partners, and staff members who have stood by us for all of these years.

Looking to the future Jewel-Craft Inc. remains committed to providing our customers with the very best. In February 2017 we broke ground on a 20,000 sq. ft. expansion of our Erlanger, KY facility, we'll continue to invest in the latest technology, and we'll search far and wide to staff the best jewelry professionals in the industry.

Jewel-Craft sells licensed jewelry brand company Logo Art. The change in ownership comes several years after the company was acquired by Jewel-Craft and granted them the permission to manufacture and market officially licensed merchandise. 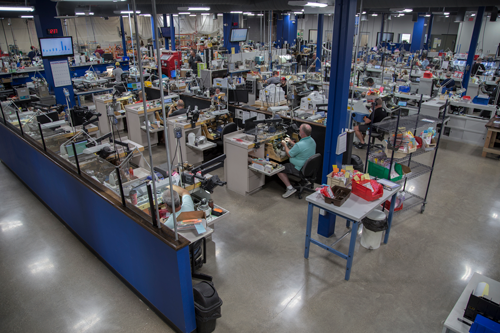 Jewel-Craft Inc, industry leaders in jewelry repair and manufacturing, have been named Vendor of the Year by RJO in the category of "Service/Specialty Goods. The RJO awards are given to draw attention to and reward outstanding sales, service and support. 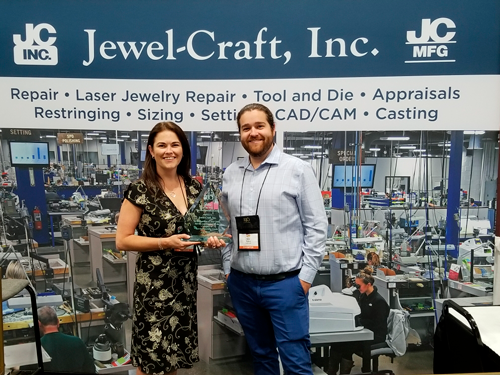 Use these buttons to navigate you through 70 years of Jewel-Craft, Inc.

Okay, Got it.
I am a goldsmith but do not have all of the tools and time to do my own custom work, so I work directly with Jewel Craft to make it easy for me and perfect for my clients. If I need a shank that is 2.35mm wide and provide my own diamonds, Jewel Craft follows all of my design details and makes the ring 2.35mm wide and sets the diamonds to perfection.
Raime, Raime Weber Jewelry
I just wanted to take a minute to express “Much Thanks” to the team of people that take care of me on a daily basis. Alyssa, Stephanie, and Lisa are always on top of things for me. For the last couple of weeks, after I told them that I’m preparing to go on my first vacation in over a year, I’ve noticed that they’ve been working very hard to meet (and usually beat) my deadlines to help ensure that I can vacation worry-free about my jewelry repairs. That means so much to me.
Michael, Williamsburg Jewelers
We LOVE Jewel Craft. Their customer service and quality of work is why we have been using Jewel Craft for over 15 years. We use them for repairs as well as custom design and they really do make dreams come true for our customers.
Margaret, Engelberts
First batch of jobs just came back from Jewel-Craft, and we are VERY pleased! Excellent communication, quality work, quick turnaround, reasonable prices. Everything we hoped for! Thanks Ross!
Dan Hacker, Hacker Jewelers
I received my most recent repair work this morning and wanted to reach out before time and the season get away from me. I've been in the jewelry business for nearly 25 years and I've seen "the good, the bad and the ugly" come out of the repair shop. You and your staff have given me an opportunity to compete for repairs with quality service I can promote with confidence. Thank you so very much.
Carol Taylor, Forever Knot in Jackson, TN
We have been working with Jewel Craft for over 20 years and I continue to use them because they are reliable. It’s like having my own 30,000 sq. foot shop, that’s how easy they are to work with. Expectations are always met and but most importantly, they are met in a timely matter.
Greg, Windsor Jewelers
Jewel Craft makes it easy. I have goldsmiths on staff but when they are on vacation or we have overflow, I can count on Jewel Craft to get our repairs done so we don’t miss a beat. I also use them for custom design jobs due to their high level of technology and efficiency.
Donna, Boyle Jewelers