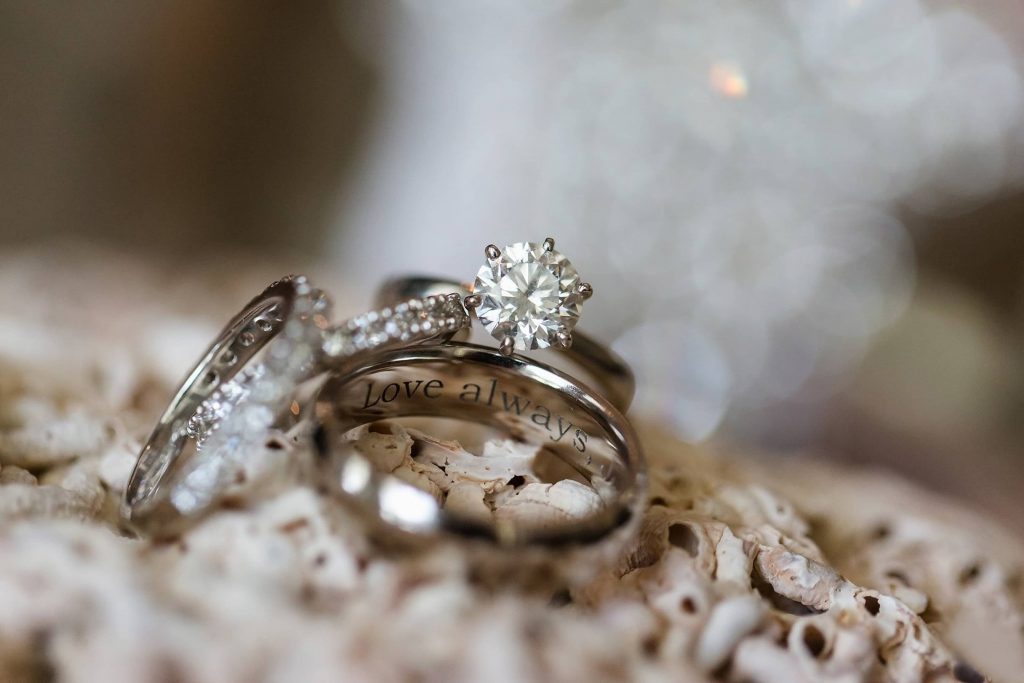 Do you own a piece of jewelry that’s inscribed with a significant message? Well, if the answer is yes, you’re lucky to share a piece of history that goes back 430,000 years or more.

Centuries ago, the art of carving precise lines into hard, flat surfaces was born. What began in ancient times with humble flint tools has evolved into contemporary laser technology. But throughout the ages engraving has been used to craft stunning works with enduring meaning. These days, we often use engraving to add a unique and individualized touch to our jewelry. It’s a tradition that Jewel-Craft proudly carries on through our laser engraving services, where we can personalize jewelry and make it truly one-of-a-kind. Let’s step back through time and explore the fascinating story of a craft which has evolved throughout the ages that still captivates hearts.

At the beginning of human history, we didn’t have the technology to make marks in metal or gemstones. But we did etch other things, like rock and shells. The first engraving was chiseled into a simple shell, dating between 540,000 to 430,000 years ago, from Java, Indonesia. Later, bone and ivory carving became a striking part of the art of the European Stone Age. Additionally, petroglyphs chiseled into rock were part of many prehistoric cultures throughout the world.

The next great leap in engraving innovation came in the first century A.D. with glass. Using a wheel, objects like bowls were carved with elaborate scenes and figures from Greek mythology. Engraving glass was popular in places such as Rome and Cologne until fading in the fifth century A.D.

During the European Middle Ages, goldsmiths pioneered engraving with a variety of metals, adding intricate patterns to jewelry and other items. By the 15th century, they started printing impressions of their sophisticated designs to record them. This practice eventually led to goldsmiths etching works of art into copper plates, using them to make the very first printed pictures.

The evolution of engraving continued in the 16th century with a simple tool. A hardened steel spire with a handle, known as a burin, was used to carve gorgeous designs into metal and wood. The unassuming burin is still utilized to this day for hand engraving.

However, with a whirlwind of changes from the Industrial Revolution, engraved copper plates were switched out for steel that could withstand the stress of a mechanized press. And as the 1800’s ebbed into the early 1900’s, personalized engraving exploded. People added an individual touch to just about everything, from trophies to family shields, commemorating their significant milestones through a special inscription.

In 1964, an invention that revolutionized several industries, including jewelry engraving, was born. Bell Laboratories created the CO2 laser, paving the way for early forms of laser etching. Over time, this innovation entered the jewelry industry. Lasers allowed jewelers to precisely carve onto small spaces, like the inside of a ring. It could be done on uneven surfaces and unlike other methods of etching, no harsh chemicals or high temperatures were involved. Plus, no dust or residue was left behind.

Etched into the Future

Engraving continues strong into the present, where people celebrate their precious moments with special inscriptions in their jewelry. With all the history behind it, this art is one of the most enduring ways to honor memorable occasions. Jewel-Craft values that long-lasting legacy, sharing the same passion as those medieval goldsmiths who spent countless hours pouring their souls into a timeless craft. With 75 years and counting in the jewelry business, we’re blessed to share some small part in this fascinating history.

We LOVE Jewel Craft. Their customer service and quality of work is why we have been using Jewel Craft for over 15 years. We use them for repairs as well as custom design and they really do make dreams come true for our customers.
Margaret, Engelberts
I received my most recent repair work this morning and wanted to reach out before time and the season get away from me. I've been in the jewelry business for nearly 25 years and I've seen "the good, the bad and the ugly" come out of the repair shop. You and your staff have given me an opportunity to compete for repairs with quality service I can promote with confidence. Thank you so very much.
Carol Taylor, Forever Knot in Jackson, TN
First batch of jobs just came back from Jewel-Craft, and we are VERY pleased! Excellent communication, quality work, quick turnaround, reasonable prices. Everything we hoped for! Thanks Ross!
Dan Hacker, Hacker Jewelers
Jewel Craft makes it easy. I have goldsmiths on staff but when they are on vacation or we have overflow, I can count on Jewel Craft to get our repairs done so we don’t miss a beat. I also use them for custom design jobs due to their high level of technology and efficiency.
Donna, Boyle Jewelers
We have been working with Jewel Craft for over 20 years and I continue to use them because they are reliable. It’s like having my own 30,000 sq. foot shop, that’s how easy they are to work with. Expectations are always met and but most importantly, they are met in a timely matter.
Greg, Windsor Jewelers
I just wanted to take a minute to express “Much Thanks” to the team of people that take care of me on a daily basis. Alyssa, Stephanie, and Lisa are always on top of things for me. For the last couple of weeks, after I told them that I’m preparing to go on my first vacation in over a year, I’ve noticed that they’ve been working very hard to meet (and usually beat) my deadlines to help ensure that I can vacation worry-free about my jewelry repairs. That means so much to me.
Michael, Williamsburg Jewelers
I am a goldsmith but do not have all of the tools and time to do my own custom work, so I work directly with Jewel Craft to make it easy for me and perfect for my clients. If I need a shank that is 2.35mm wide and provide my own diamonds, Jewel Craft follows all of my design details and makes the ring 2.35mm wide and sets the diamonds to perfection.
Raime, Raime Weber Jewelry